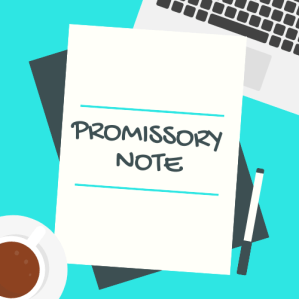 At the request of some of the members here in posts and in private.
A promissory note is one of the common and common collateral in lease agreements to secure the tenant's obligations to the landlord.
Until recently, notes could be purchased at the Postal Bank and this service was discontinued. In fact, there is no special formal requirement for a promissory note and can be printed on plain paper.
If it is necessary to use the promissory note, its use is simple and easy and can be filed directly for execution without the need for a monetary claim, but the tenant and the guarantor have the right to object to the amount claimed in full and / or partially in which case the case is brought to court.
In practice, this is what almost always happens when you don't see money directly and you have to wait for the wheels of justice that work slowly and even very slowly.
The realization of the promissory note requires that legal proceedings be taken and in addition it is contingent upon the financial ability of the tenant and the Arabs at the time of realization and the possibility of collecting from them the amount of the promissory note we had, whether they have funds and / or assets that can be used for debt collection.
A promissory note is non-negotiable and does not specifically allow for the tenant's obligations under the lease agreement.
In terms of the tenant, the promissory note is fair and without real risk as its realization is contingent upon a breach and / or failure to fulfill a liability in accordance with the lease agreement and subject to judicial review. Therefore, the concern of tenants that the amount in the bill will be high is a mere concern, as the ability to redeem the collateral is limited to the actual level of debt, if any, and not to the amount filled in the bill, which is intended to reflect all possible risks.
It is recommended to sign the promissory note two good evenings after their background is checked. In addition, photo IDs must be attached to their IDs.
The amount of the promissory notes should reflect a multiplication of the rent twice the period required to evacuate a tenant from an asset in accordance with the worst-case scenario (approximately 12 months) and the agreed amount of compensation stipulated in the agreement.
From David Melnick's Law Firm and Notary.

Suitable for a renters program from Hell that was yesterday 🙂

If a promissory note protects the rent, what should protect the apartment itself?

Thank you for this wonderful post. I understand that a security dough can only be taken for rent for 3 months, except for an open dough for any authority (water, local, gas and electricity)
Can God add a promissory note?

Interesting, thank you. What are the maximum guarantees that can be based on the periphery where it is almost impossible to get a promissory note?

Great post but today there is the option to insure the dachshunds ... so I think it is better to insure dachshund

Mentormind updates in the support forum